TechGraphIt\'s All About News
HomeBankSentBe launches its remittance service in the U.S.

SentBe launches its remittance service in the U.S. 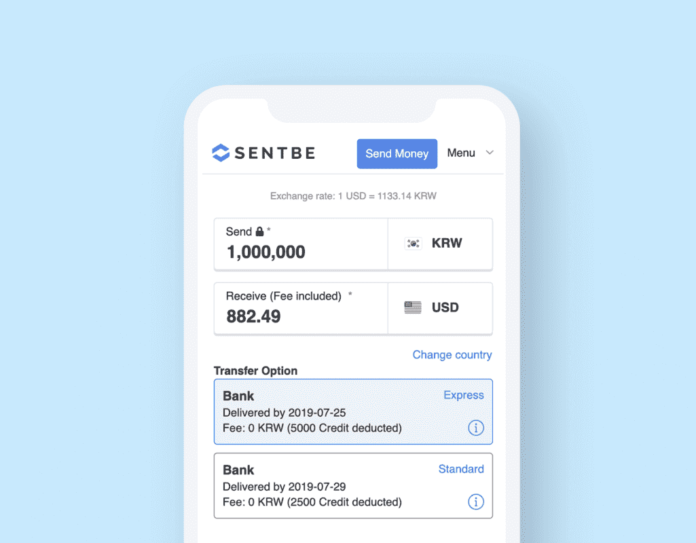 Korean fintech giant, SentBe on Tuesday announced the launch of its international money transferring service in the United States (U.S.). As a part of the expansion SentBe customers, including migrant workers in the U.S., can send U.S. dollars to more than 50 countries at a lower rate than existing remittance options.

Established in 2015, SentBe specializes in foreign exchange services, and its remittance service of the same name SentBe was launched in 2016. Traditionally, the global money transfer process is complex, expensive, and slow.

However, using the SentBe service via the mobile app or website, users can transfer money in real-time or up to one day to 50 countries at a tenth of the cost of traditional methods. While traditional remittance methods through banks can only take place between other banks, SentBe provides various receipt methods depending on the user’s preferable options.

With its customer-centric approach to cross-border remittance services, SentBe was able to quickly grow its presence in Southeast Asia. In 2020, SentBe became the first Korean fintech company to launch personal remittance app services in Indonesia and Singapore. This will consolidate its position as one of the leading remittance service providers in APAC.

Now with SentBe’s service available in the U.S., customers in the region can send money to 50 countries including China, India, the Philippines, Vietnam, Canada, the U.K., France, and Korea.

According to the World Bank, the U.S. is the largest outbound remittance market in the world with $72,669 million transferred by individuals a year in 2021. The U.S. is the fourth country where SentBe’s cross-border remittance services have been introduced, following Korea, Indonesia, and Singapore.

Speaking at the launch, Alex Seong-Ouk Choi said, “SentBe has been widely used by migrant workers across Asia, and its success in the region is based on our emphasis on removing cross-border barriers and bringing convenience to customers.”

“We are bringing the same experience to the U.S., one of the largest financial markets in the world, and we will continue to expand our services to other markets including Canada, Australia, and countries in Europe,” Choi further added.

To launch U.S. market services, SentBe formed a task force and has laid the foundation for international money transfer business by collaborating with certification agencies, government ministries, traditional financial institutions, and fintech partners in the U.S. In addition, the company conducted a thorough technical verification process to create a smooth remittance experience for users in the U.S.

In 2019, SentBe was the first Korean company to acquire a cross-border money transfer service license from the Monetary Authority of Singapore (MAS). In December 2021, SentBe also received approval for the Singapore Payment Gateway (PG) license, which enables the company to offer a B2B PG service that sends remittances from Singapore to other countries. SentBe’s licenses in Singapore, a prominent hub of financial and foreign exchange markets in the region, signify its effort to expand its business in the global market.

As India strives towards becoming a $5 trillion economy, the upcoming 2023 Unio...
Budget 2022